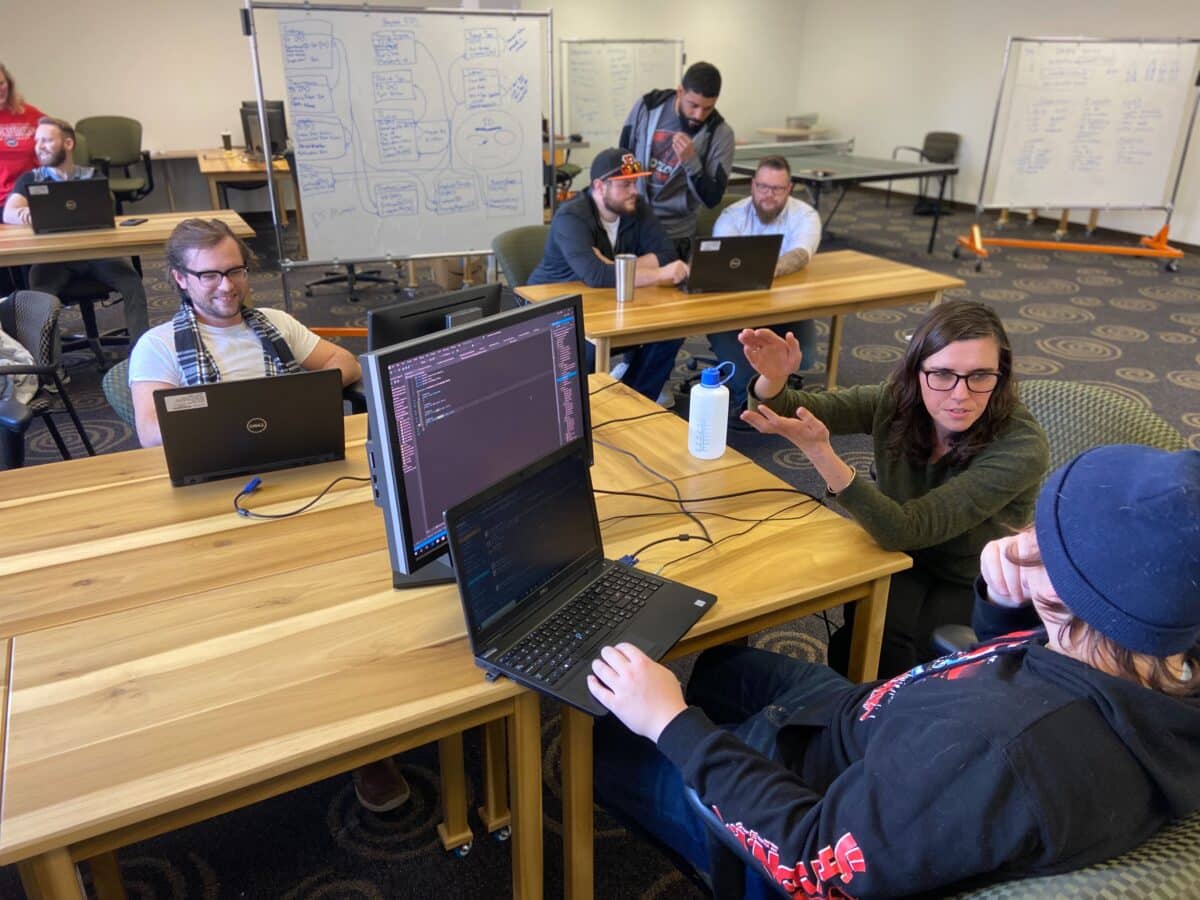 West Virginia has struggled to attract and retain young professionals.

Generation West Virginia worked to change the narrative held by many policymakers — that broadband a niche issue having to do with social media — rather than a piece of infrastructure necessary for economic and workforce development.  They also organized direct advocacy efforts, including a Broadband Lobby Day at the Capitol.

Respond to the state’s specific conditions

Generation West Virginia and AARP built support for a broadband bill that contained a number of smaller, less expensive broadband policy changes rather than a proposal to build infrastructure across the state. Legislators were more receptive to the bill’s piecemeal, low-expenditure approach to expanding high-speed internet access.

The legalization of broadband cooperatives

The creation of a state fund to expand broadband infrastructure projects

The bill established a loan insurance program that guarantees up to 80% of loans made by commercial banks to providers building broadband infrastructure in underserved areas, helping to offset some of the financial risk associated with rural broadband projects. The state allocated up to $50 million to the program during its first year.

The Council membership structure now includes citizens—actual broadband users—from each of the state’s legislative districts, rather than just the legislators, agency representatives, and representatives from Internet service providers (ISPs) that had previously filled the Council’s membership.

Generation West Virginia is a nonprofit dedicated to attracting, retaining, and advancing young people in the Mountain State.  Through its fellowships, workforce training, network engagement, and other programs, the organization works to create opportunities in a state that has struggled to attract and retain young professionals. Over half of West Virginia University graduates leave the state within five years of graduation. 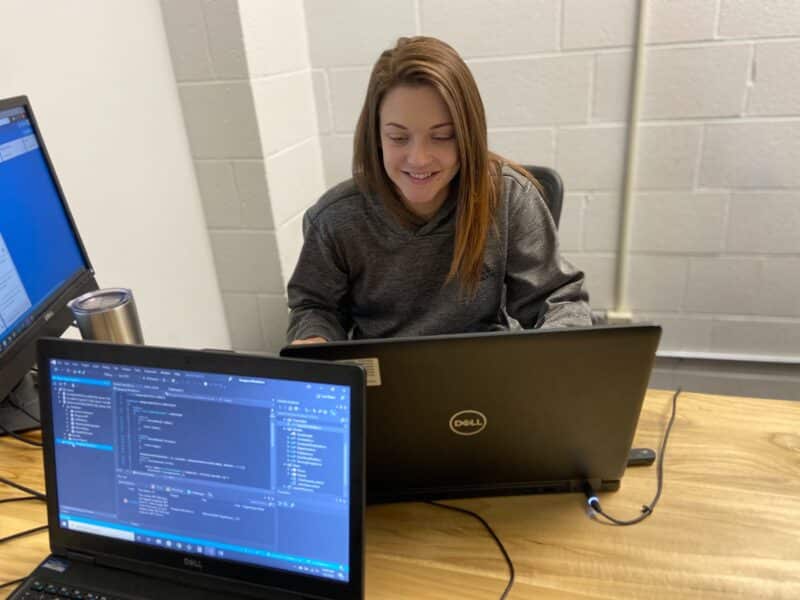 In 2014, Generation West Virginia started to see how the state’s workforce struggles were connected to broadband access. The organization had heard about young peoples’ barriers to staying in the state, such as how difficult it was to find high quality careers across diverse sectors or make connections in local areas. It also heard frequent complaints about the internet. Largely rural, West Virginia has one of the lowest broadband access rates among states. Rural areas across the country tend to have less access to broadband, reflecting the high costs of building infrastructure in places with low population density. Hearing these complaints, Generation West Virginia made the connection between broadband access and the state’s struggle to retain its young people: high-speed internet is crucial for the things important to young people, like starting businesses, making local connections, and receiving services like education and health care.

High-speed internet is crucial for the things important to young people, like starting businesses, making local connections, and receiving services like education and health care.

Despite broadband’s importance, West Virginia had done little to prioritize policy and program efforts needed to bring broadband to unserved and underserved areas. In fact, state law made it difficult for communities to gain access. Statute did not enable the formation of broadband cooperatives, which can be a cost-effective way to bring broadband to rural and remote areas. And while peer states like Kentucky were establishing programs and initiatives to expand broadband access, West Virginia’s policymakers had not yet developed a significant broadband program.

Working Toward a Solution

Generation West Virginia knew its workforce development efforts would be hindered if nothing was done to expand broadband access.  During the state’s 2015 legislative session, the organization learned that a young state senator had introduced a bill to address West Virginia’s broadband problem. That bill would have established a network of state-owned broadband infrastructure, with a focus on bringing middle-mile infrastructure to unconnected communities. Kentucky, one of West Virginia’s neighbors, had decided to build a similar network called KentuckyWired the previous year.

Generation West Virginia immediately began to advocate for the bill. First, it challenged how the issue was framed. Many state policymakers considered broadband a niche issue having to do with social media, rather than a piece of infrastructure necessary for economic and workforce development. Generation West Virginia worked to change this narrative. In a January 2015 op-ed, the organization’s executive director, Natalie Roper, made the case for broadband’s importance: “This isn’t about young people wanting the ability to check Twitter at all times. It is about our generation recognizing that the internet serves as the foundation for all 21st-century economic development and information sharing. To deny this is to deny opportunities for revitalization and access to services.”(1)

“This isn’t about young people wanting the ability to check Twitter at all times. It is about our generation recognizing that the internet serves as the foundation for all 21st-century economic development and information sharing. To deny this is to deny opportunities for revitalization and access to services.”

Generation West Virginia also organized direct advocacy efforts. While the legislature was in session, the organization and its partners planned a Broadband Lobby Day at the Capitol. The event’s attendees—many of them members of Generation West Virginia’s network of young people—received training on how to engage with their legislators. Then they met with legislators during scheduled appointments. By the end of the day, both legislators and citizens had learned about broadband expansion’s importance to economic development, health care, and other areas.

The bill did not pass that year, with many policymakers deterred by the relatively high level of investment needed to build a state-owned network of broadband infrastructure. Unconvinced of broadband’s importance, these policymakers were reluctant to invest in assets whose benefits were unclear to them. But Generation West Virginia was not deterred. During the next year’s legislative session, the organization partnered with AARP to strengthen the coalition educating policymakers on the importance of broadband access to all ages and together the groups doubled down on advocating for the reintroduced bill. Nevertheless, the 2016 broadband bill was defeated again, dying in the House. While a growing number of policymakers understood broadband’s importance, many were still held back by the costs of building state-owned infrastructure.

By the 2017 legislative session, Generation West Virginia and AARP had built a broad coalition in support of a broadband bill, and two years of op-eds, phone calls, and meetings with legislators had moved public opinion in support of a broadband bill. During the session, Generation West Virginia, AARP and its coalition used their previous tactics to build support for a different broadband bill, HB3093, that contained a number of smaller, less expensive broadband policy changes rather than a proposal to build infrastructure across the state. Staff advocated for the broadband bill every day at the Capitol, and the coalition continued its strategic citizen engagement. Unlike their reaction to previous broadband bills, legislators were more receptive to HB3093’s piecemeal, low-expenditure approach to expanding high-speed internet access.

Generation West Virginia and AARP’s efforts paid off: both the House and the Senate passed HB3093. And after the coalition made a final push to prevent a veto, Governor Jim Justice signed the bill into law on April 26, 2017.

In addition to these major features, HB3093 made several minor changes to the technical regulations surrounding building broadband infrastructure. These changes were intended to make building the infrastructure more efficient. 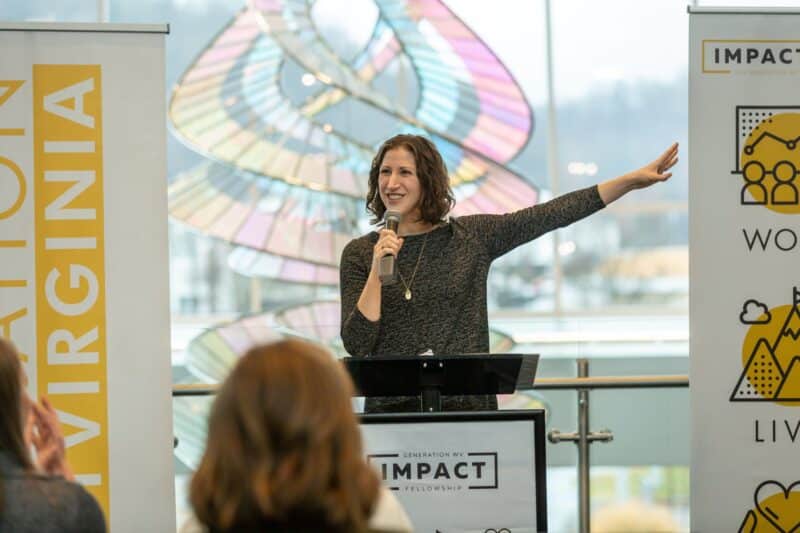 Natalie Roper speaks at an event for Generation West Virginia’s Impact Fellowship, one of the organization’s programs designed to attract, retain, and advance young people in West Virginia.

Although less than three years have passed since HB3093 was signed into law, the bill is already leading to real change for communities across the state.

As of November 2019, the Broadband Infrastructure Loan Insurance Program has helped finance two projects bringing broadband infrastructure to underserved communities. One project, a multi-county effort, used a commercial loan insured by the program to receive a grant from the Connect America Fund Phase II auction. The auction requires matching funds, and without loan insurance the project likely would not have raised enough private funds to be eligible for its Connect America Fund award. With stable funding, the Broadband Infrastructure Loan Insurance Program is expected to support more broadband projects in coming years.

While the loan insurance program’s funding is certainly important, the bill’s changes to the Broadband Enhancement Council are likely to have the longest-lasting impact as the Council continues to develop policies that meet the needs of real people.

For example, the Council has helped expand funding sources for broadband projects. In 2018, in collaboration with the Council, West Virginia’s Development Office made broadband projects eligible for the state’s Community Development Block Grant (CDBG) funds. Previously, these funds had been used only for water and sewer projects. That year—the first full year after the bill became law—the state awarded a total of $1.5 million to 12 broadband projects across the state. Combined, these projects cover part or all of 27 counties—half of the state’s total.(2)  Many of these CDBG projects focus on initial broadband planning. In addition to these changes to the CDBG program, the Council also has helped streamline the state’s regulations surrounding technical aspects of building broadband infrastructure—such as allowing projects to use of state highway right-of-ways – that are expected to make broadband infrastructure less costly. 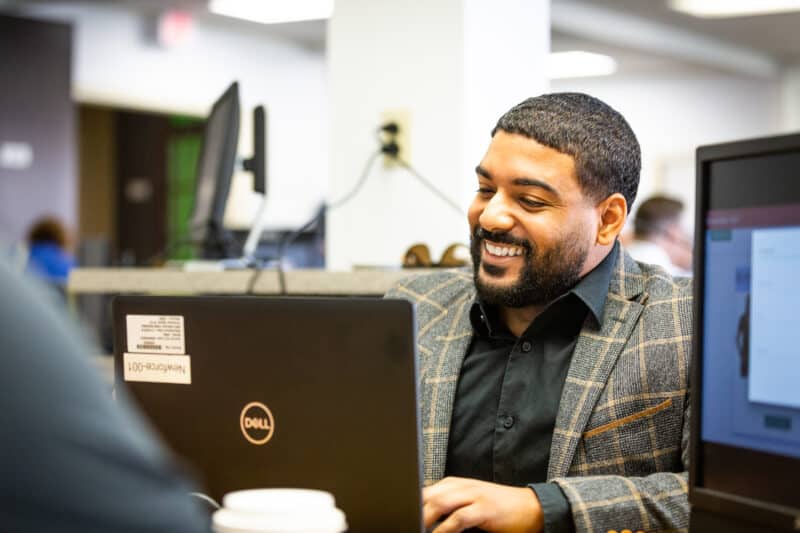 While some localities have expressed interest in forming the broadband cooperatives enabled by HB3093, most localities lack the experience and technical knowledge needed to undertake such projects. Unlike many other rural states, West Virginia lacks a strong tradition of rural electric cooperatives, which have been able to apply their existing cooperative expertise to broadband service in other parts of the country. To help address this barrier, the Broadband Enhancement Council partnered with West Virginia University’s Entrepreneurship and Innovation Law Clinic to create a Broadband Cooperative Toolkit. The document provides technical guidance to communities seeking to create a cooperative.

Generation West Virginia is proud of HB3093’s impacts, although it acknowledges that more work must be done to bring broadband to all of the state’s residents. Today, at least 15% of the state’s residents still lack access to fixed (non-mobile) broadband(3), with the actual percentage without access likely higher given the FCC’s methodology for collecting broadband access data. Accordingly, the organization plans to remain involved in broadband policy going forward.

“Young people want to be part of policy — they want a space to be heard and to be involved. You just need to create access points.”

Reflecting on her organization’s work, Natalie Roper sees several lessons for those working on broadband policy and advocacy in general. After working with a broad array of stakeholders to pass HB3093, it became clear to Roper that broadband is a unifying issue, with many different constituencies wanting high-speed connections and the benefits those connections bring. By framing broadband as a unifying issue, Generation West Virginia was able to create the strong coalition needed to effect change. But Roper points to one constituency as particularly important to advocacy work in general: young people. “Young people want to be part of policy — they want a space to be heard and to be involved,” she says. “You just need to create access points.”

More From Blueprint for Transition

See it in Action