Building local leadership is key in transition efforts. By being nimble and creating programs that think about the jobs of tomorrow, GRIT is preparing both youth and adults in Southern Ohio for the future of work. The creation of this inclusive, regional program is the foundation for a collaborative spirit that makes a discernible difference in people’s attitudes and outlooks.

From Volunteer’s Idea to Public-Private Partnership

Decades ago, Randy Chandler left Adams County to become a regulatory compliance engineer with General Electric in Cincinnati. But he hasn’t forgotten the community where he was raised.

For years, he’s returned to help create and expand volunteer efforts with local churches, schools and other organizations to stem poverty, drug addiction and the lack of access to jobs in his home county, about 65 miles east of Cincinnati. But he was always itching to find a way to make a deep impact with a lasting effort that had a larger reach.

That possibility arose in spring 2018 when then-Attorney General Mike DeWine convened a statewide meeting focused on reining in Ohio’s opioid crisis. Chandler was invited to attend because of his tireless volunteering.

It’s where he met Denise Reading, the chief executive officer of GetWorkerFIT, a social enterprise company near Cleveland. The entrepreneur had grown up in rural Arkansas and understood why people in Appalachian Ohio often felt left behind and discounted, despite outside promises of change.

Chandler and Reading talked about coordinating a program that could help high school students and adults receive the training and direction to land living-wage jobs where they could work remotely.

At the time, Adams County was under even more economic distress because of the shutdown of two coal-fired power plants operated by Dayton Power and Light. The closings eliminated an estimated 1,131 jobs in the region and cost local governments and schools $8.5 million in lost tax revenue.

“Adams County was one of Ohio’s poorest counties and less than 50 percent of the population had access to the internet,” Reading said. “How do you build hope when people look around, and there are no jobs and their family members are dying?”

Reading and Chandler kept brainstorming after the conference ended.

By autumn 2018, DeWine had been elected governor. He and his Lt. Gov. Jon Husted, eager for a jobs program to take root in Appalachian Ohio, directed Chandler and Reading to devise a name for their budding initiative, expand it beyond Adams County and apply for a state grant.

They called it Growing Rural Independence Together. In 2019, with the promise of at least $8 million in state money for two years, GRIT formed a 14-member steering committee to start figuring out how to connect residents of Adams, Brown, Pike, Scioto and Highland counties with jobs that allowed them to support their families. Both Reading and Chandler were stunned when 105 residents turned out to contribute ideas. They met in a pole barn set up in a church because it was the largest place they could find.

What evolved from that initial meeting are two connected GRIT programs. One is designed to help high school students identify their career strengths and figure out how to connect with college, training and jobs. The other offers the same type of assistance for adults intent on changing jobs or re-entering the workforce.

GRIT is partnering with Ohio Means Jobs, part of the state Department of Jobs and Family Services, as well as community colleges, career and technical centers, courts, drug treatment centers and high schools across the five-county region to make it easy for everybody to plug-in to what organizers hope becomes a universal system.

GRIT launched its high school effort during the 2019-20 school year. Organizers were undeterred when the coronavirus pandemic forced schools into virtual learning mode in spring 2020. And they have continued to propel GRIT forward during the 2020-21 academic year as schools blend virtual learning with in-person classes.

In a nutshell, GRIT entails connecting students with a software program called Future Plans, created by Reading’s company. The online assessment tool allows students to identify their vocational and academic strengths and also lines them up with a one-on-one coach. Prior to the student rollout, GRIT had trained 300 teachers about program basics. 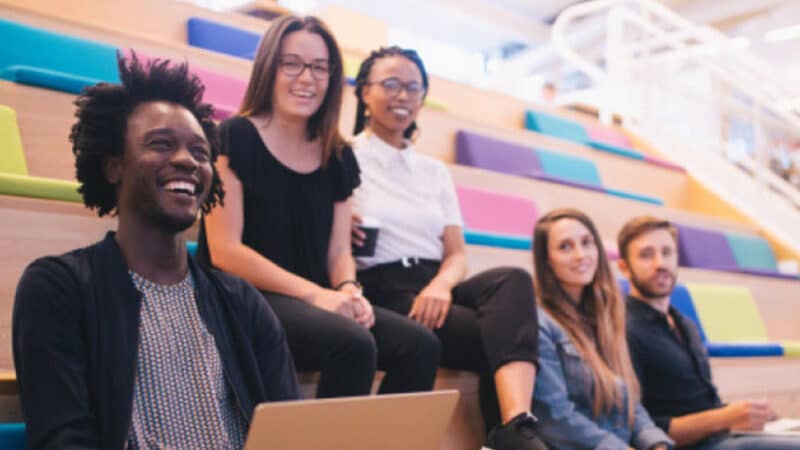 Organizers are intent on reaching roughly 5,000 students at some 30 high schools during a two-year span.

Coaches—who can be teachers, guidance counselors or community members—serve as mentors as students figure out what sort of certifications, degrees or other qualifications they will need for a particular career. A recent upgrade to Future Plans allows students to explore wages and salaries for specific jobs and whether they can be done remotely.

Surveys in Adams County consistently revealed that while 60% of high-schoolers told adults they would be enrolling in college, only 22% followed through.

“That 16-month window after graduating from high school is when these kids fall off a cliff if they don’t have a plan,” Reading said. “That’s why we want to build a pathway to hope when they’re in the school system.

The unanticipated scourge that is COVID-19 forced GRIT organizers to pivot on several fronts to give the program continuity. One, they have been meeting online instead of in person. Two, many students couldn’t log on to Future Plans when closed schools limited their internet access. Organizers opted to shift some of the grant to pay to add online hotspots to school district buses and vans. That allowed high schoolers to complete homework assignments and access Future Plans software.

Already, some of the high school students have been placed in marketing and public relations internships.

Chandler serves as the volunteer chairperson for GRIT.

“Due to the timing on GRIT, it didn’t allow us to help the power plant workers directly, but we are helping high school students find out what jobs they are qualified to do,” Chandler said. “We want to help change their mindset when they are younger to give them a better outlook on what is possible.”

GRIT organizers are now building out assessment services for about 1,000 adults. They expect to have the first shared remote work center operational in New Boston, a community in Scioto County, during the first quarter of 2021.

It will be the first of three to five such centers planned in repurposed buildings across the region. Ideally, they will include onsite childcare and wellness care to help employees reduce extra stressors that can keep them out of the workforce.

One huge hurdle is outfitting each center with broadband access. As was the case with the hotspots for schools, GRIT is willing to fund interim solutions. Meanwhile, other private and public ventures are devoting their resources to solving the broadband problem.

Adults enrolled in GRIT have access to the Future Plans software, which walks them through an assessment that evaluates their existing skills, training and schooling possibilities, as well as job openings and career options.

At the adult level, GRIT is aimed at the unemployed, the underemployed as well as those in recovery and on parole. Adults receive one-on-one coaching from somebody already trained to offer guidance. They also learn essential professional skills such as how to write a resume, conduct an interview and negotiate compensation.

“We’ve put everything in one place, so people know where they can study, who will hire them and if they can work remotely,” Reading said about the Future Plans database. “It takes us back to the issue of why GRIT works. It’s because everyone is using the same tool and we all understand how it works.”

Research shows that many residents in the region will turn down jobs paying $10 or $13 an hour because they can make more money staying on government assistance. Having online access to a career at the national or global level changes that dynamic because it also cuts out commute time.

Grit Growing on Every Level

Even as its name recognition grows, Reading and others know some decisions are out of their hands. For instance, recently she and others learned that $2.5 million of their initial $8 million will be dedicated to building a career and technical center in Adams County.

That’s frustrating because many job opportunities are lost in the extended time it takes to find a site, construct a building and set up programs.

“With GRIT, our question is always, ‘What can we do today, in this moment, in real time?’” Reading said. “That’s the new world of work.” 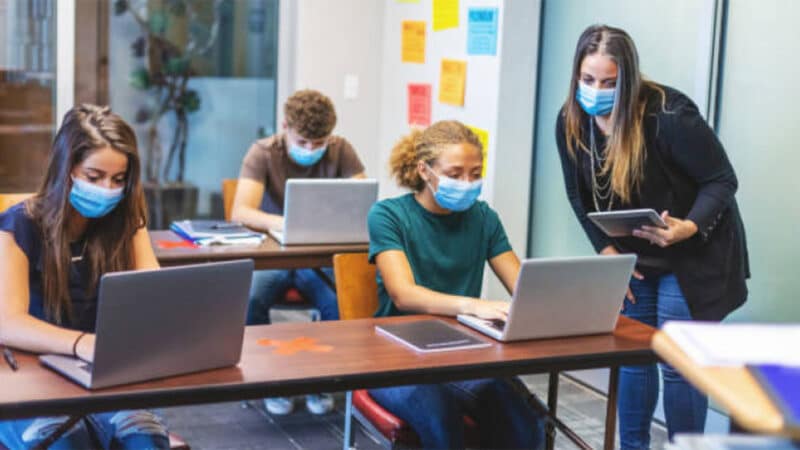 The $8 million in the original funding cycle for GRIT is available through December 2021. Organizers will be requesting more funding in spring 2021 to include five or six more Appalachian counties in Ohio.

GRIT has resisted becoming a nonprofit organization. For now, it prefers functioning as a grassroots public-private partnership, with the Workforce Investment Board at Ohio Means Jobs serving as its fiscal agent.

“We debate it every 90 days,” Reading said about the ongoing nonprofit discussion. “With the way we’re doing it now, we’ve found people are being cooperative instead of territorial. And the proliferation of nonprofits has not been the alleviator of poverty.”

Reading’s company, which has donated hundreds of hours establishing and operating GRIT, receives a user fee for each Future Plans participant. “It’s a versatile tool that can work anywhere,” she said about Future Plans.  “We prefer to use it to help communities, as we are with GRIT.”

Expanding GRIT in Ohio or across Appalachia doesn’t mean growing it for the sake of growth, Reading explained. Her company has incorporated an evaluation program into Future Plans so results can be measured at regular intervals and changes made as necessary.

“Our biggest success so far is that by having local people connect, we’ve been able to solve problems the state alone hasn’t been able to solve,” Reading said. “We’re innovating together and helping individuals be on the right path.

Call center already on board

Already, Reading and the GRIT team fielded a request from a call center seeking to hire 400 remote employees immediately and eventually hire more. Pay starts at $14 an hour and jobs come with a computer and health, dental and retirement benefits.

“Traditionally, it’s a call center, but we prefer to call it a contact center because employees will be helping the public with issues such as COVID-19, health insurance and federal retirement plans,” Reading said.

These types of jobs are ideal because experience and expertise employees gain can open an internal path to management and also link workers to jobs in insurance, retirement planning and other related industries.

The Future Plans database gives GRIT organizers quick access to readily available employees because it tracks who has been assessed and what their skillsets are.

The recruiter with the contact center learned about GRIT via word of mouth.

In addition, GRIT leaders have had conversations with insurance companies, mortgage lenders and banks. One insurance company already has GRIT “graduates” on its hiring radar.

That’s exciting, Reading said, because annual salaries with the insurance company can be about $40,000 and open job possibilities in the connected fields of marketing, public relations, sales, and information technology specialists.

“If 10 students out of a high school graduating class of 60 could go to work and make $40,000 year, that can make a radical difference in a community,” Reading said. “If it happens four years in a row, communities can change their own destiny.”

Reading said the possibilities connected with such large employers are huge because of their needs for marketing, public relations, sales and information technology specialists.

In a region that’s recovering, an overarching program such as GRIT can be the foundation for a collaborative spirit that makes a discernible difference in people’s attitudes, Reading said. Smaller isolated pilot programs make it difficult to prompt a mindset change that leads to a cultural change.

“In Appalachia, the culture is one of our barriers and also one of our assets as we evolve forward,” Reading said.