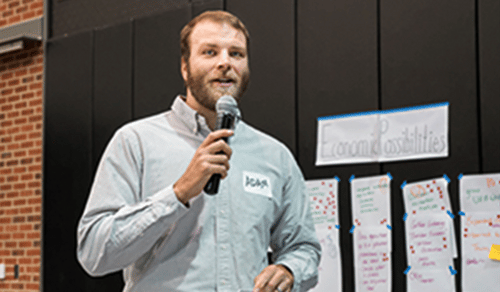 An Interview with Brian Sewell, Director of Strategic Advancement at Appalachian Voices

Talk to us about your organization and community:

Appalachian Voices was founded in 1997 to protect the land, air, water, and communities of Central and Southern Appalachia. In recent years, we’ve established solutions-based initiatives dedicated to advancing a sustainable economic transition in communities where new opportunities and investments are most impactful. We are focused on reducing the impact of coal and advancing clean energy development. We work at the grassroots level to engage citizens and ensure they have a say in the decisions that affect their lives, and at every level of government to promote positive outcomes for the communities where we work.

How is Appalachian Voices working to help your region make a just transition away from coal toward a new economy?

In early 2015, we launched our New Economy program, which is focused in the Southwest Virginia counties that have been most affected by coal job losses and declining tax revenues from coal production. We opened an office in Norton, Va., and began working with community members, businesses, and local leaders to foster a more inclusive conversation about economic priorities and strategies to build a healthier, more prosperous future.

Later that year, we organized and hosted a series of community forums to gain a greater understanding of local residents’ ideas to boost their local economies. Approximately 130 local residents participated the series, including concerned citizens, small business owners, educators, elected officials, and coal industry representatives. The range of interests represented at the forums reflected the level of support for state and federal efforts to revitalize the coalfields by promoting sustainable, generative industries. And, today, Appalachian Voices is acting on the robust public interest in seeing distributed solar energy and repurposed abandoned mine lands as economic drivers in Virginia’s coalfield counties.

In spring 2016, we participated in the regional Economic Forum hosted by the University of Virginia’s College at Wise, where we convened the Solar Workgroup of Southwest Virginia. We have since recruited a number of influential and non-traditional stakeholders including state agencies, county economic development authorities, and local colleges and are leading a multi-phased project to accelerate the pace and capacity of installed solar in the area. In our role as a convener of the workgroup, Appalachian Voices is gathering the regional capacities necessary to see solar projects developed that encourage “in-sourced” supply chains and spur workforce development initiatives that train for jobs in the clean energy sector.

Since starting this work, what has Appalachian Voices been able to accomplish?

In addition to our efforts to accelerate solar development, our collaboration with regional partners contributed to the introduction of the RECLAIM Act to the U.S. House of Representatives and the bipartisan support the bill has received to date. To strengthen the prospect of securing funds for the region, Appalachian Voices led an effort to inventory abandoned mine lands in Southwest Virginia and identify sites with potential for economically beneficial reuse. We profiled 14 of these sites in our October 2016 report, Healing Our Land, Growing Our Future, and will continue to educate lawmakers and the public about the importance of the RECLAIM Act to address the legacy costs of coal mining and create local economic opportunity.

As communities across the region seek to protect their natural heritage and diversify their local economies, Appalachian Voices is making sure citizens’ perspectives, concerns, and aspirations inform an equitable transition to an economy that is healthy in the broadest sense. We’re grateful for the support and partnership of the Just Transition Fund.

<< Learn more about our impact